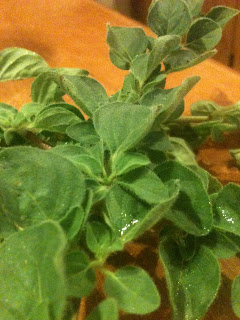 Bolognese sauce is one of the most versatile sauces in the Italian kitchen. Learning to make a good bolognese sauce is one of the staples of any Italian family.   Every family has their own recipe and their own family secrets to the sauce but basically the idea is the same.   My family  recipe secret is fresh Oregano.  Oregano is another one of my all time favorite herbs and I use a good bit of it in my Bolognese Sauce.  If you can't find fresh you can use dried but there will be a taste difference. Fresh is always best and I recommend you grow your own.  It is a hearty plant and does well in most any garden  and the smell is unbelievable.  Bolognese sauce is a meat sauce that usually in Italy is served over a thicker pasta like tagliatelle or pappadelle but here in the USA it is usually served over spaghetti pasta or even capellini pasta (something that would never be done in Italy)

The name for the sauce is "alla Bolonese" which means in the style of Bologna (the place not the meat).  The sauce originated in Bologna ,Italy along with a meat called Mortadella which is the grandfather of American bologna.  In 1977 Mortadella was banned in the US because of safety concerns. This is when American bologna was born.  Although similar in taste the original has always been more flavorful and comes in several varieties.  In Feb 2000 the ban was lifted and the US once again was able to get Mortadella.However, none of this has anything to do with Bolognese Sauce.  I just thought it would be good to know a little background.

Try this recipe maybe on a weekend with the whole family together but save the leftovers and I will share another great recipe for that next time. 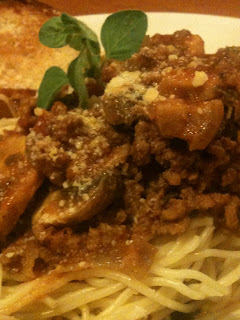 In a cast iron dutch oven coat the bottom of the pan with about 3 T of extra virgin olive oil and saute garlic and onions for about 2 min.  Add ground meats to the pan and salt and pepper the meats.  Cook meats together until browned then add stewed tomatoes and tomato sauce.  Stir to mix.  You will need to add about 2 c water to the sauce and then add the seasonings to the sauce. Add fresh oregano by pulling leaves off of the stalks and adding the whole leaves in the pot.  Allow the sauce to cook down on a med heat for about 1 1/2 - 2 hours. While the sauce is cooking down you can also add sliced fresh mushrooms if you like but this is optional.  Serve over your favorite cooked pasta and remember to save the leftovers.

Best Ever Omelets for Breakfast or Dinner