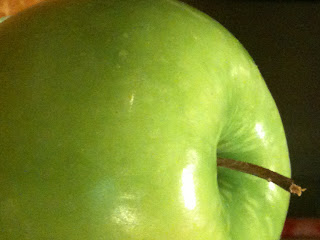 Normally you would not expect to read about an apple pie recipe in the middle of the summer.  It is true that I absolutely love apple pie but it is 100 degrees outside and not many people are thinking of baking apple pies right now.  So why is my blog on July 10th about apple pie?  The answer is very simple. I have a beautiful niece named Daisy and her birthday is July 11.  Daisy wanted an apple pie for her birthday from her Aunt Danie and so I made apple pie in July.  I thought it would be a great time to share my recipe for one of my favorite pies and then we can all practice the recipe together until we get it exactly right for Thanksgiving. I am sure we can find some testers for our successes as well as our mistakes along the way.I have made MANY apple pies and I developed this recipe over all the years.  Apple pie is as simple and basic as it gets but I have seen many failures.  I really hope you try this recipe at least once and then put it in your family book of recipes to pass on because it is simple, straightforward, and pretty much foolproof. Hope you enjoy it as much as Daisy did. Happy Birthday Daisy !!!! 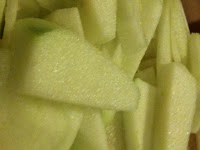 1 t vanilla Peel and core apples. Slice apples into 1/4 inch slices and  put in a bowl. Squeeze juice from lemon onto apples to keep them from oxidizing. Toss apple pieces in lemon juice.  Add sugar, cinnamon and vanilla to the apples and toss together.  Try to make sure all of the apples are coated evenly 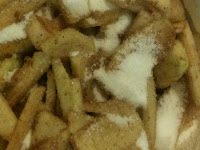 Line pie pan with one of the pie crusts. I buy the rolled kind that come two to a pack and I just unroll the pie crust onto the pie pan.  It needs to hang over the edges just a little so you will be able to make a edge to the crust. Put apples into the pie crust that is in the pie pan.  Sprinkle the top with the remaining 1/4 c sugar and dot the top with butter (as shown in the picture below right)Now you are ready to put the top crust on and normally I just unroll the other crust directly on top of the pie and I cut a vent hole in the middle but Daisy wanted the lattice top crust.  For this you need to unroll the other pie crust onto a wooden cutting board and cut it evenly into strips.  Lay strips across the center of the pie evenly spaced and only attached at one end.  Weave the other pie crust pieces over and under in the opposite direction  to create a basket weave pattern on the top of the pie. This sounds alot harder than it actually is and the results are always beautiful.  If all else fails though you can always just topthe whole pie with the crust and cut a vent hole in the center.bake the pie at 350 for about 30-45 min.  The apples will be fork tender 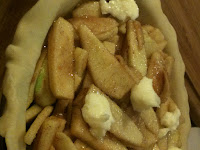 when pierced.  Let stand to slightly cool and the serve with ice cream. 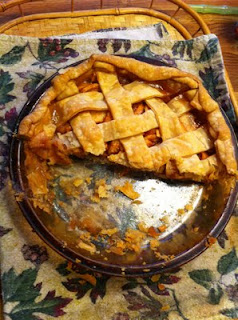 This is the pie after the birthday girl and her friends and family got to it.  I do have a funny side note though.  While taking the pictures for the blog the pie was put on a table at  my nieces house and after the pictures were taken and the family went outside to the pool, the dog found the pie and finished off the last of it.  I guess Zoe likes apple pie too.

It looks like I will be baking another apple pie this July.

Best Ever Omelets for Breakfast or Dinner